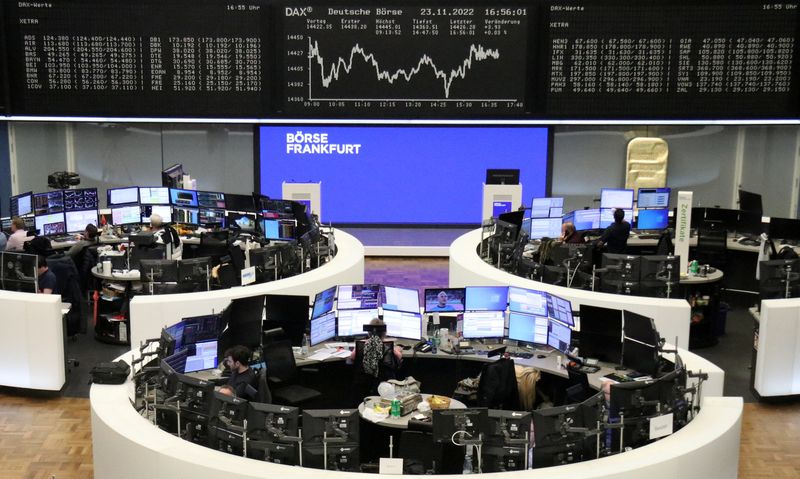 By Sruthi Shankar and Devik Jain

(Reuters) – European stocks closed at a new three-month high on Thursday led by gains in real estate after minutes from the Federal Reserve’s November meeting signaled a slowdown in the pace of interest rates.

The pan-European STOXX 600 index rose 0.5% to its strongest level since Aug. 18, although sales were light due to the US Thanksgiving holiday.

Wall Street ended with gains on Wednesday after minutes of the US central bank’s meeting showed “many” policymakers agreed that it “may be appropriate soon” to cut interest rates.

“It was in line with expectations for a small rate hike, however, confirming that risk will be higher,” said Karim Chedid, head of investment strategy for iShares EMEA at BlackRock (NYSE:).

“The difference with the ECB is that the recession that we expect in Europe will be long-term. It means that the ECB will not be able to go to the Fed and in the end they will start cutting rates faster. than the Fed.”

Minutes from the European Central Bank’s October meeting showed policymakers fear inflation could stabilize, justifying more rate hikes, but for how long and for how long.

Separately, ECB board member Isabel Schnabel, a leading figure, rejected recent calls from many of her colleagues to raise interest rates low, saying it was out of time and could prove counterproductive.

“Recent comments by ECB officials suggest that discussions at the December meeting will be contentious and controversial,” Carsten Brzeski, global head of ING, said in a statement.

“We now expect the ECB to raise rates by 50bp in December and another 25bp in February. The big question will be around the amount of tightening (QT) or in other words, the reduction of the ECB’s balance sheet.”

In addition to Thursday’s euphoria, the Ifo Institute survey showed that business sentiment in Germany rose more than expected in November and expectations for the coming months fell sharply.

The benchmark STOXX 600 has rallied more than 15% since its September 29 close as positive earnings weather and the prospect of a lower interest rate hike by the Fed overshadowed fears of a recession in Europe.

The real estate sector was the best performer in Europe, rising by 2.5% as the German government provided the most funding. [GVD/EUR]